Proceed to Cookie Policy page and click Accept to agree to cookies being used while working with your data. In case you decide to turn this feature off you can do it any time convenient for you

Pope’s Essay on Criticism – Analyzing what You Have Read 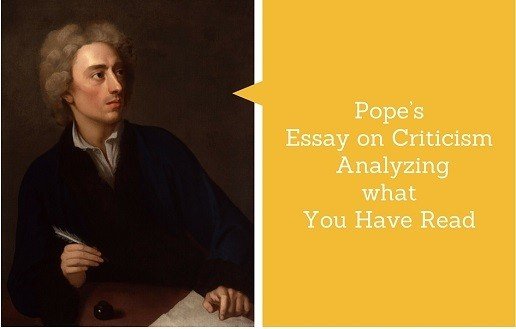 If you are enrolled in an English literature course, you will undoubted study Alexander Pope. He wrote poetry during the period that has come to be known as the Enlightenment, a time when there was great emphasis on return to the science and reason of the ancient classical civilizations, namely Greek and Roman. Pope believed that we should return to those classical greats in many ways, including the ways in which we criticize (analyze) what others write.

An Essay that is not an Essay

Interestingly, Pope’s Essay on Criticism is not an essay at all. It is a lengthy poem, divided into three parts, that speaks to how critics of literature ought to behave as they analyze and critique the works of other writers. It is one of two of the most famous works of this poet, the other being The Rape of the Lock, a satirical poem directed at society of his day. It is divided into three parts and has given us all some very famous quotes, as follows:

Each of the three parts instructs literary critics in the “rules” for preparing a criticism analysis essay on someone else’s writing. He cautions them against the “deadly” sins of pride and envy – emotions that may make for a biased and unfair critique. He further states that critics must be humble, and, while, everyone may have his/her opinions on a piece, these should not be set forth as unadulterated fact.

Writing the Essay on the Essay

An analysis essay on Alexander Pope, An Essay on Criticism will not be an easy one. Because it is a poem, it will have to be analyzed as such. What is the major point being made by the poet? And how is the poem presented – stanzas, rhythm, meter, etc. Most every student who has been tasked with such an essay will seek to research what others have had to say about the poem. One commonly used source is found at An Essay on Criticism, Sparknotes, a prominent internet-based source for summaries and analyses of all major literary works. You need to be careful, however, because, with such widespread use of this source, your essay may sound like so many others, and it will be obvious to your professor that your thoughts may not be your own.

If you want your essay on An Essay on Criticism to sound different from those of your classmates, and thus earn you a better grade, you should consider using a custom essay writing service – one that can give you an English literature expert to produce an original, custom essay that will not read like any others that are submitted. PremierEssay.net is such a custom writing service and we have those English literature scholars to meet your needs. Don’t struggle with this essay or any other for that matter. Just fill out that order form and experience what top quality and service are really like!

Do not know exactly what you need?

When you do not want to spend money in vain and be sure that we can complete your complex assignment, fill out Evaluation form and we will find the best writer for free!